The Premier League fixture at Selhurst Park on Saturday will see home side Crystal Palace go up against opponents Burnley.


Crystal Palace
With 29 points from 26 games, Crystal Palace are currently 11th in the EPL standings, three points off Southampton in the top half of the table. Crystal Palace returned to winning ways last Wednesday as they comfortably saw off Watford 4-1 away from home. Prior to that, the Eagles were on a six-game winless streak in the league, losing three and claiming three draws. 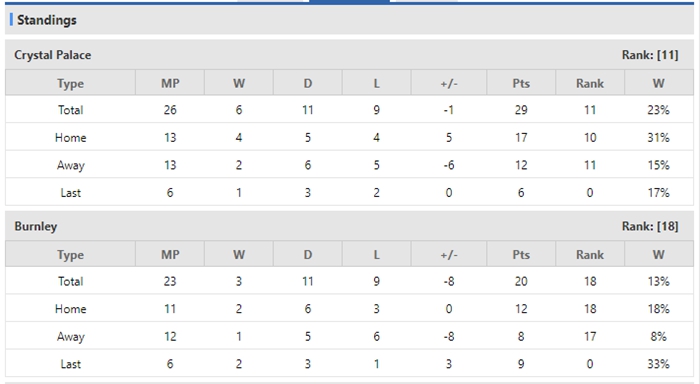 Burnley
Burnley have been one of the absolute worst teams in the whole English top flight right from the start of the season. Two points off Newcastle United just outside the relegation zone, Burnley are placed 19th in a table of 20. The Clarets have now made it two wins from two league outings for the first time this season after stunning Tottenham Hotspur when the sides met on  Wednesday as they claimed a 1-0 victory. Prior of that, they saw off Brighton and Hove Albion 3-0 in their previous games.


Prediction
Coming off impressive wins in midweek, both sides will head into the game in rejuvenated spirits and we expect a thrilling contest on Saturday. Burnley head into the game on a two-game winning streak, so predict them to be unbeaten.

Football English Premier League Burnley Crystal Palace
(Disclaimer：Any views or opinions presented are solely those of the author and do not necessarily represent those of NowGoal. We disclaim any responsibility and accepts no liability for any direct or indirect loss or damage arising from any inaccuracies.)