Manchester City will be visiting Goodison Park on Saturday for the Premier League meeting with hosts Everton.


Everton
Everton are placed 16th in a table of 20, and they have been losing almost all of their fixtures. They had lost four of their past six games, and they were also winless in 16 of their past 19 overall fixtures. They come into the game on the back of a 2-0 defeat away to Southampton in a game they deserved to lose. Everton have scored 5 and conceded 9 goals in their previous 6 matches. 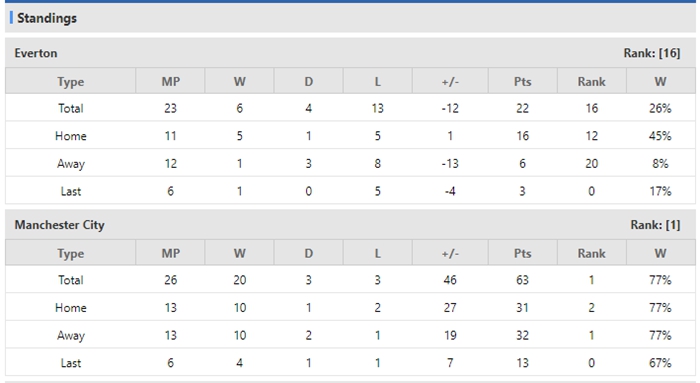 Manchester City
Manchester City are still at the top of the table - but the gap between them and Liverpool is just six points. Manchester City fell to a 3-2 defeat to Tottenham on home turf. They were on a four-game winning streak before that. Prior of that game, they overwhelmed Sporting CP and beat them 0-5 on Champions League. 17 of the previous 22 fixtures of the reigning champions had three or more goals.


Prediction
Manchester City will be wary of seeing their lead at the summit reduced even further. Therefore, expect Pep Guardiola's side to secure a comfortable victory.

Football English Premier League Manchester City Everton
(Disclaimer：Any views or opinions presented are solely those of the author and do not necessarily represent those of NowGoal. We disclaim any responsibility and accepts no liability for any direct or indirect loss or damage arising from any inaccuracies.)