Mainz head to Stadion An der Alten Försterei on Saturday for the Bundesliga 1 game with home side Union Berlin.

Union Berlin
Union Berlin lost 1-0 at Bielefeld in the last round of the league, suffering a third successive league defeat and a slump in form. The team has failed to score in the last three games. But united Berlin have been relatively stable at home this season, losing only to Dortmund and Bayern Munchen. 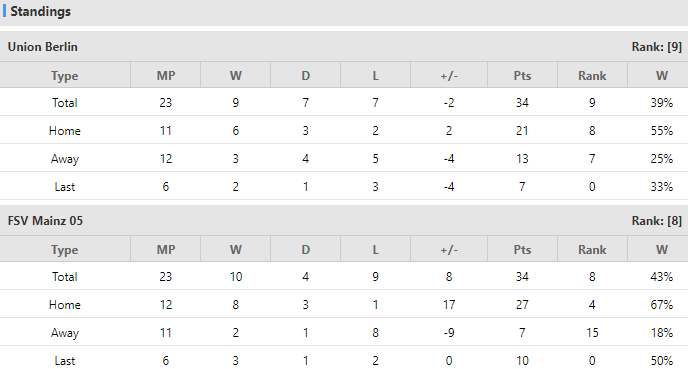 FSV Mainz 05
Mainz beat Bayer Leverkusen 3-2 at home in the last round, two wins and one draw in the last three rounds, but the team's recent away performance is still very low, the past 10 matches away only one win, one draw and eight losses this season is not worth looking good.

Verdict:
There is not much difference between the two sides and Mainz is in better form. The 1X2 first odds is 2.25-3.25-3.10, seems lacked of confidence to the home team. Mainz should take points in ths game.

Football German Bundesliga FSV Mainz 05 Union Berlin
(Disclaimer：Any views or opinions presented are solely those of the author and do not necessarily represent those of NowGoal. We disclaim any responsibility and accepts no liability for any direct or indirect loss or damage arising from any inaccuracies.)