The Bundesliga 1 meeting at Sportpark Ronhof Thomas Sommer on Saturday will see hosts Greuther Furth go up against opponents Koln.

Greuther Furth
Furth, who lost 4-1 to Bayern Munich in the last round and have lost two of their last three games, have been in a bit of a slump, but have been good in attack lately, scoring in each of their last five games and scoring 11 points in a run of three wins and two draws in their last five home games. 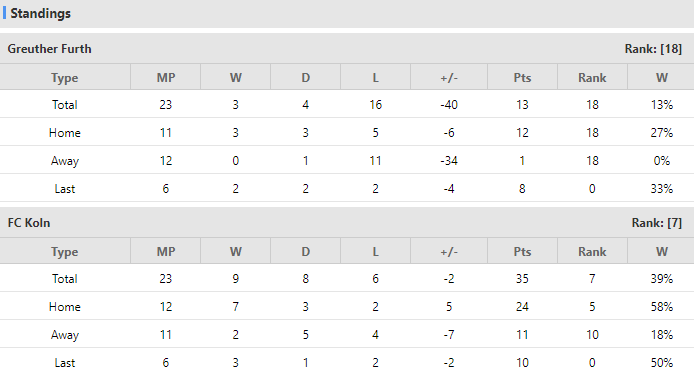 FC Koln
Koln beat Eintraching Frankfurt 1-0 at home last time, have won two of their last three games and are now two points clear of fourth-placed Leipzig in excellent form, morale and intent. They have a.700 record against teams lower in the standings and come into the game confident.

Verdict:
The strength gap between the two teams is so wide that the game is not in suspense. The 1X2 first odds is 3.80-3.60-1.83, which means support the away team. Koln should win ths game.

Football German Bundesliga FC Koln Greuther Furth
(Disclaimer：Any views or opinions presented are solely those of the author and do not necessarily represent those of NowGoal. We disclaim any responsibility and accepts no liability for any direct or indirect loss or damage arising from any inaccuracies.)