Gladbach will take to the pitch with visiting club VfL Wolfsburg at Borussia-Park in this Bundesliga 1 fixture on Saturday.

Borussia Monchengladbach
Monchengladbach suffered a huge blow to their morale when they were thrashed 6-0 at Borussia Dortmund in the last league round. It was their 12th consecutive game in which they have conceded a goal, and they are giving up nearly three goals per game. 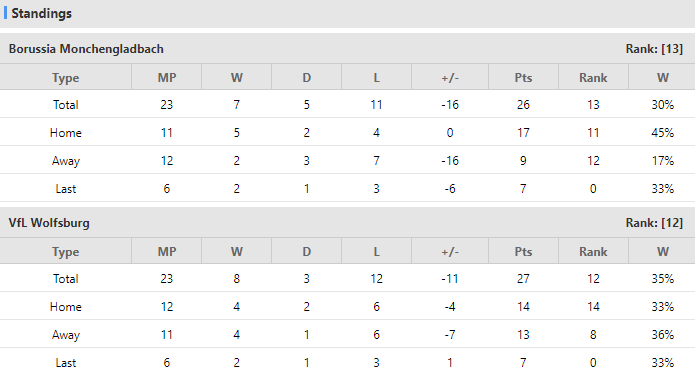 VfL Wolfsburg
Wolfsburg lost 2-1 at home to Hoffenheim in the last round, ending a two-game winning streak and suffering from poor form and morale. Weghorst, the striker who led the team in scoring this season, has left the club with 6 goals.

Verdict:
There is not much difference between the two teams and neither is in good form. The 1X2 first odds is 1.95-3.50-3.60, which means support the home team. Monchengladbach should win ths game.

Football German Bundesliga VfL Wolfsburg Borussia Monchengladbach
(Disclaimer：Any views or opinions presented are solely those of the author and do not necessarily represent those of NowGoal. We disclaim any responsibility and accepts no liability for any direct or indirect loss or damage arising from any inaccuracies.)