The Serie A match at Stadio Luigi Ferraris on Friday sees hosts Genoa take to the field against opponents Inter Milan.


Genoa
Genoa are second from bottom and have as many as six points between them and the safe zone at the moment. They are yet to record a win at home this season as they go into this on the back of four consecutive draws in Serie A. Genoa come into this game on the back of a 1-1 draw against Paolo Zanetti's Venezia in the league. They have scored and conceded no more than two goals apiece in total during their past four draws. 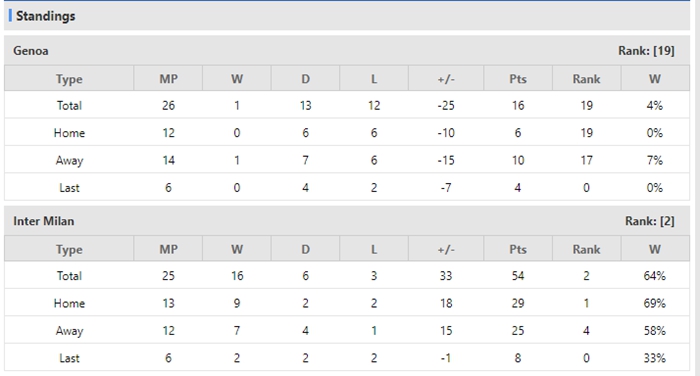 Inter Milan
Having won only one of the last five Serie A outings and gone three points behind AC Milan atop the Serie A ladder, the defending champions sit second on the table right now. The stretch was mainly caused by a very tough and complicated schedule that featured the games against Atalanta, AC Milan, Roma, Napoli, and Liverpool across competitions. Inter Milan lost 2-0 to Alessio Dionisi's Sassuolo in the league.


Prediction
Genoa have certainly tightened up at the back since their latest switch of management, but have yet to be faced with the sort of firepower even an off-form Inter Milan. Inter Milan should beat Genoa.

Football Italian Serie A Inter Milan Genoa
(Disclaimer：Any views or opinions presented are solely those of the author and do not necessarily represent those of NowGoal. We disclaim any responsibility and accepts no liability for any direct or indirect loss or damage arising from any inaccuracies.)