AC Milan will be facing visiting opponents Udinese at Stadio Giuseppe Meazza in this Serie A tie on Friday.


AC Milan
Recording 56 points, AC Milan are placed top in the table. They have won three and drawn one of the last four matches across competitions. AC Milan come into this game on the back of a 2-2 draw against Davide Nicola's Salernitana in the league. It represented the first time in six years that the team atop the Serie A standings had failed to beat the side at the bottom. 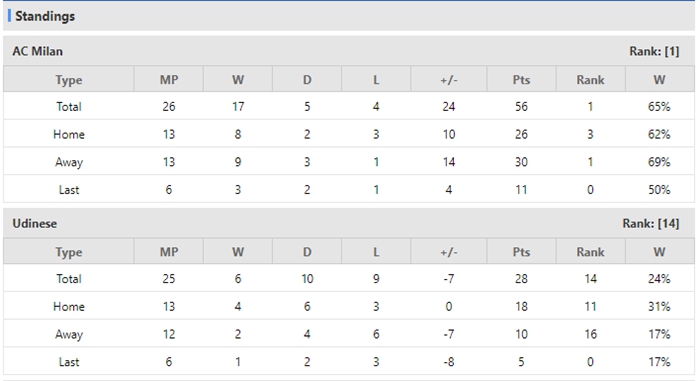 Udinese
Udinese are having a subpar campaign in this term of Serie A. They are currently just three points above the danger area with only 5 wins in 24 outings so far in the season. Udinese drew 1-1 against Maurizio Sarri's Lazio in Serie A. The draw came after a terrible showing in a 4-0 defeat away at Hellas Verona two weeks ago.


Prediction
AC Milan are unbeaten in the last four meetings with Udinese. They may have been held by struggling opponents last week, but having racked up league goals at an average of two per game this term, Milan are almost certain to score against a far from watertight Udinese back three.

Football Italian Serie A Udinese AC Milan
(Disclaimer：Any views or opinions presented are solely those of the author and do not necessarily represent those of NowGoal. We disclaim any responsibility and accepts no liability for any direct or indirect loss or damage arising from any inaccuracies.)