Hoffenheim line up against guests Stuttgart at PreZero Arena in this Bundesliga 1 fixture on Friday.


TSG Hoffenheim
TSG Hoffenheim sit fifth in the league table with 37 points from 23 games. Hoffenheim have been excellent at their stadium so far in the season, winning 7, drawing 2, and losing 2 of 12 home outings in Bundesliga. They picked up a 2-1 comeback win over Wolfsburg in their last game. Hoffenheim have failed to prevent opponents from scoring in 5 of their previous 6 matches, shipping 12 goals on the way. 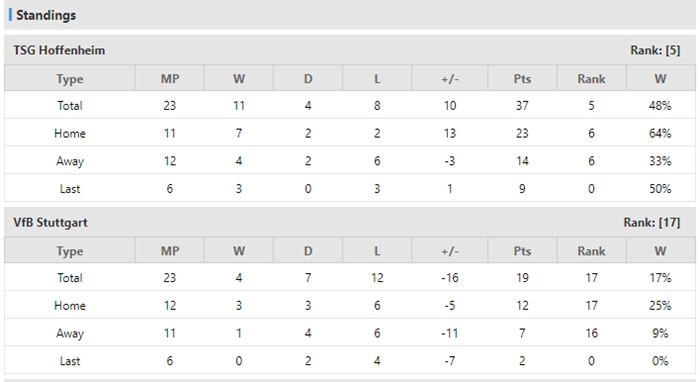 VfB Stuttgart
Stuttgart are in poor form at the moment and the second from bottom at the moment, sitting three points below Augsburg who hold the relegation playoffs position. In their previous game, they were very close to snatch a huge win over Bochum last time out but went on to concede a late equalizer in the stoppage time. They have allowed at least two goals in four of the last five Bundesliga affairs, claiming only one point along the way.


Prediction
Hoffenheim are on a run of back-to-back victories, while Stuttgart are winless in their last eight league games. The hosts should have more than enough to pick up all three points this weekend.

Football German Bundesliga VfB Stuttgart TSG Hoffenheim
(Disclaimer：Any views or opinions presented are solely those of the author and do not necessarily represent those of NowGoal. We disclaim any responsibility and accepts no liability for any direct or indirect loss or damage arising from any inaccuracies.)

Betty 420 Article
Betty loves the game of soccer since she was a child, this passion allowed her to embark on a career as a soccer analyst. She believes all leagues have their own charms. Accurate soccer predictions give me a great sense of accomplishment”, Betty said.
See More Article