Elche make the trip to Estadio Ciutat de Valencia on Friday for the La Liga game with home side Levante.


Levante
Levante resides at the rock bottom closing the 20th position on the table with a mere 14 points. Of the 24 matches played, they won only twice in the league while drawing 8 times and losing on 14 other occasions. Levante have avoided a loss in their last two fixtures: they played out a 1-1 draw at Celta Vigo in their previous outing as they closed the gap between them and 19th-placed Alaves to five points. 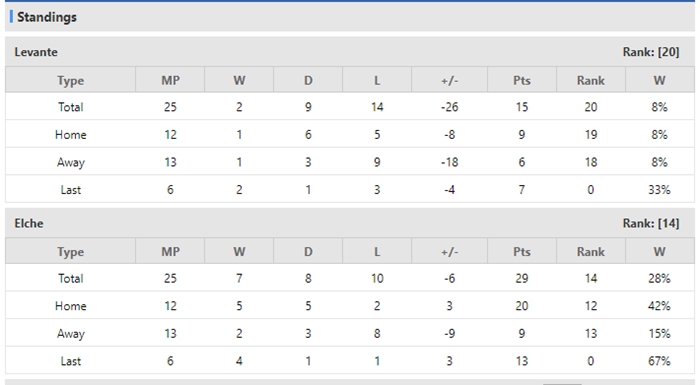 Elche
Elche are currently nine points clear of 18th-placed Cadiz and just three points behind ninth-placed Celta Vigo. With the 2-1 home win against Rayo Vallecano, Elche have won their last 3 home matches in the league. They have been scored against in 5 of their last 6 games. Defensively, they have been far from perfect as they let their opponents get 8 goals in all.


Prediction
Levante's two wins in the ongoing La Liga campaign came in 2022, so they seem to be on the right track to regain form in the league. Elche have also regained form since the beginning of the year and have four wins in their last six league games. While both sides will be vying for a win here, a low-scoring draw seems to be the likely outcome.

Levante to be unbeaten
BTTS (Both Teams to Score)

Football Spanish La Liga Elche Levante
(Disclaimer：Any views or opinions presented are solely those of the author and do not necessarily represent those of NowGoal. We disclaim any responsibility and accepts no liability for any direct or indirect loss or damage arising from any inaccuracies.)