Southampton
Currently 10th in the table, Southampton have been in great shape and played some exciting matches lately. They have had to face Manchester City, Tottenham Hotspur, Manchester United and Everton in their last four Premier League gamweeks. The Saints performed admirably across the four fixtures, picking up wins against Spurs and Everton and settling for a draw against City and United. Southampton have only lost one of their 12 home league matches this season. 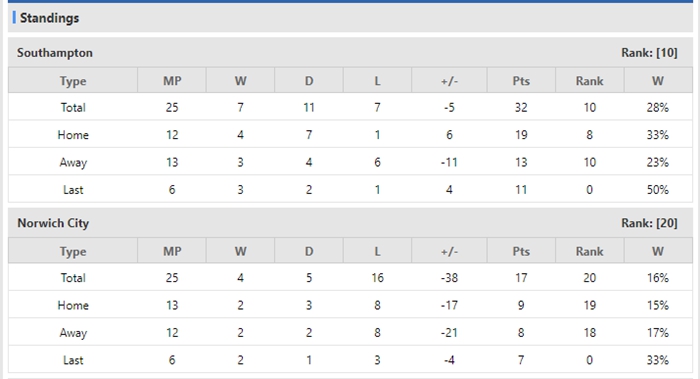 Norwich City
Norwich City are back at the bottom, now five points from the safety of 17th position. They are back down in 20th following successive defeats to Manchester City and Liverpool, conceding seven times in the two matches. They had performed decently under new manager Dean Smith up until then, going unbeaten in three successive Premier League games. That run included wins against Everton and Watford.


Prediction
Norwich City have definitely improved under Dean Smith. However, Southampton have been playing like a well-settled team of late. And they have won their last four home games against Norwich in all competitions. Therefore, expect the Saints to take all three points on Friday.

Football English Premier League Norwich City Southampton
(Disclaimer：Any views or opinions presented are solely those of the author and do not necessarily represent those of NowGoal. We disclaim any responsibility and accepts no liability for any direct or indirect loss or damage arising from any inaccuracies.)