The Eredivisie fixture at Mandemakers Stadion on Friday will see home side RKC Waalwijk go into battle with FC Twente.

RKC Waalwijk
Waalwijk head into this match after a 1-1 Eredivisie drawn result versus NEC. It’s been a rare occasion in recent times where Waalwijk have managed to hold out for a full 90 minutes. It will be a concern for them that Waalwijk have been scored against in 6 of their previous 6 matches, leaking 13 goals along the way. Such a pattern might not be sustained into this next game, though. 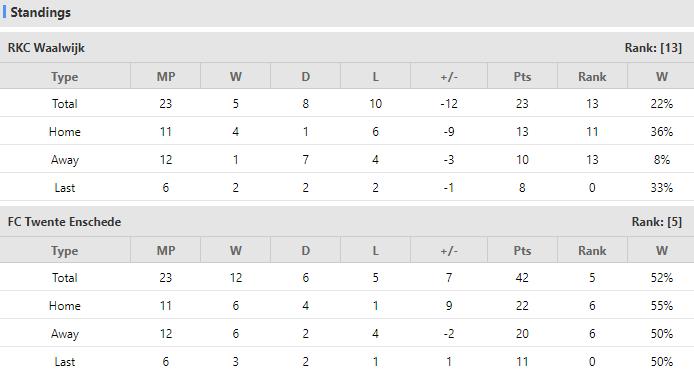 FC Twente Enschede
Previously, Twente drew 2-2 in the Eredivisie match with Go Ahead Eagles. During their 6 most recent matches, Ron Jans's Twente have turned their attacks into goals 9 times thus yielding them a goals per game average of 1.5. Going into this contest, Twente have not registered a win against Waalwijk when having played them away from home in the previous 4 matches in the league. Not good at all.

Verdict:
Both side have been in poor form, but Twente is the stronger team. The 1X2 first odds is 2.75-3.50-2.20, seems lacked of confidence to the home team. Twente should take points in ths game.

Football Holland Eredivisie FC Twente Enschede RKC Waalwijk
(Disclaimer：Any views or opinions presented are solely those of the author and do not necessarily represent those of NowGoal. We disclaim any responsibility and accepts no liability for any direct or indirect loss or damage arising from any inaccuracies.)