Sporting Braga
Sporting Braga have failed to make it past the round of 32 in five consecutive appearances in the tournament. They lost 2-0 in the first leg of the tie between the two sides last week. Braga have by no means been impressive offensively of late as they did not score two or more goals in any of the last four games across competitions. 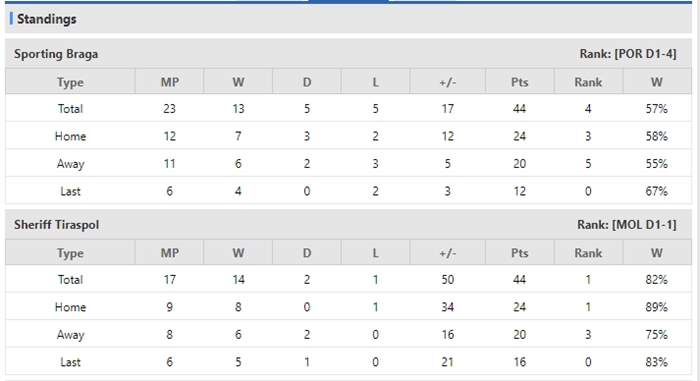 Prediction
Sheriff Tiraspol are on a five-game unbeaten run in which they have scored 14 goals and kept four clean sheets. And they held Shakhtar Donetsk to a 1-1 draw away in the last game of the group stage in UEFA Champions League. Therefore, expect they will win this game with handicap.

Sheriff Tiraspol to Win with AH +1.5

Football UEFA Europa League Sheriff Tiraspol Sporting Braga
(Disclaimer：Any views or opinions presented are solely those of the author and do not necessarily represent those of NowGoal. We disclaim any responsibility and accepts no liability for any direct or indirect loss or damage arising from any inaccuracies.)