This looming Europa League game sees Real Betis fighting it out with their opponents Zenit St Petersburg on Thursday.


Real Betis
Real Betis are in a great competitive rhythm at the moment. They won eight of the last nine games across competitions. Real Betis came out on top in the first leg of the tie last week, winning 3-2. They sit sky-high third in La Liga standings, they are on the best way to reach the Copa del Rey final after beating Rayo Vallecano 1-2 on the road in the first semifinal leg 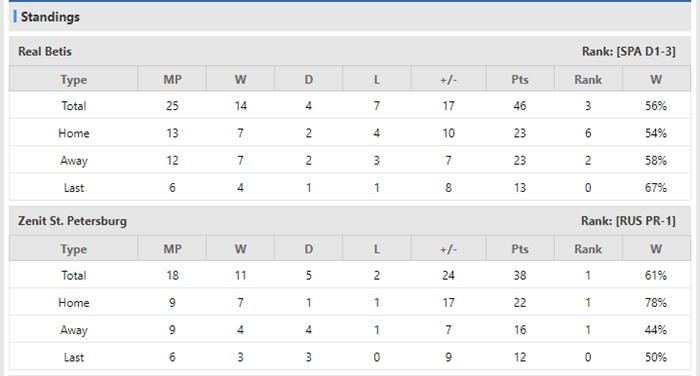 Zenit St. Petersburg
Zenit have shown poor performances on the road in the group stage of UEFA Champions League this season. They took only one point from three away outings against Chelsea, Juventus, and Malmo FF, conceding six goals in the process. Zenit are still on the winter break as they will return to action in the Russian Premier League only on Monday with the home game against Rubin Kazan.


Prediction
Real Betis have come alive this season under veteran manager Manuel Pellegrini. Zenit St Petersburg have won just two of their last nine competitive games and could see their European campaign come to an end this Thursday.

Football UEFA Europa League Zenit St. Petersburg Real Betis
(Disclaimer：Any views or opinions presented are solely those of the author and do not necessarily represent those of NowGoal. We disclaim any responsibility and accepts no liability for any direct or indirect loss or damage arising from any inaccuracies.)