RCD Espanyol have just picked up two wins, seven draws and six defeats since this season, but they are inspire form the last draw against Barcelona with 1-1 in last away game. On Copa Del Rey, they also drew Celta Vigo with 1-1. 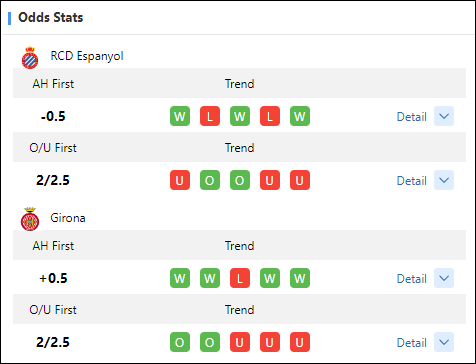 Girona are one of the newly-promoted teams. They are coming off a 2-2 away draw ay Gerona, and they failed to keep clean sheet lately on the League. They just won one out of the seven away games, conceding 1.57 goals in average. They have already been eliminated in the Cup, and make them have an advantage in physical condition.

In the latest six meetings between these teams, RCD Espanyol took lower hand with only two wins but four defeats. Both sides are not in satisfying forms, but the live odds are not good for Girona, therefore, I will predict a close game and the host will win the Handicap.