Tottenham Hotspur visit Turf Moor on Wednesday for the Premier League game with home side Burnley.


Burnley
Burnley remain second from the bottom with 17 points from 22 games, five points off safety with two games in hand. So far they have registered just two wins this campaign. Burnley comfortably saw off Brighton 3-0 on Saturday, their first victory in 11 top-flight matches. Prior of that game, they lost 0-1 to Liverpool at home. Only Norwich have scored fewer goals than Burnley in the whole campaign. 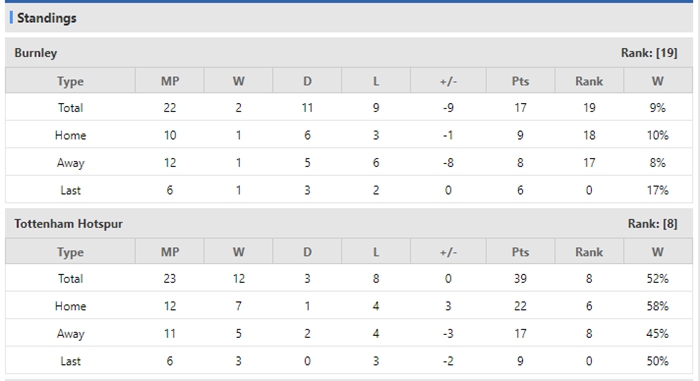 Tottenham Hotspur
Tottenham Hotspur remain top-four outsiders while they lie eighth in the rankings. After three consecutive defeats, they returned to winning ways in emphatic fashion. Antonio Conte's side beat the reigning champions Manchester City 3-2 at the Etihad, which marked the third Premier League away game in a row that Tottenham have conceded two goals. Three of the previous four games of Spurs had four or more goals.


Prediction
Burnley have been really poor this season, while also scoring just 20 goals so far. Besides, Tottenham Hotspur have won their last three against Burnley with three clean sheets in tow. So, a repeat of that performance on Wednesday will easily clinch the Spurs all three points.

Football English Premier League Tottenham Hotspur Burnley
(Disclaimer：Any views or opinions presented are solely those of the author and do not necessarily represent those of NowGoal. We disclaim any responsibility and accepts no liability for any direct or indirect loss or damage arising from any inaccuracies.)