Leeds United head to Anfield on Wednesday for the Premier League fixture with home team Liverpool.


Liverpool
Liverpool are now on a long winning streak, and need a surplus of just six points to climb level with the first-placed Manchester City. They were  unbeaten in 41 of their past 43 overall fixtures, and they had also won 12 of their past 13 appearances at home. On last time out, Liverpool thumped Norwich City 3-1 at home on Saturday. They had scored a total of 22 goals from their past seven home matches as well. 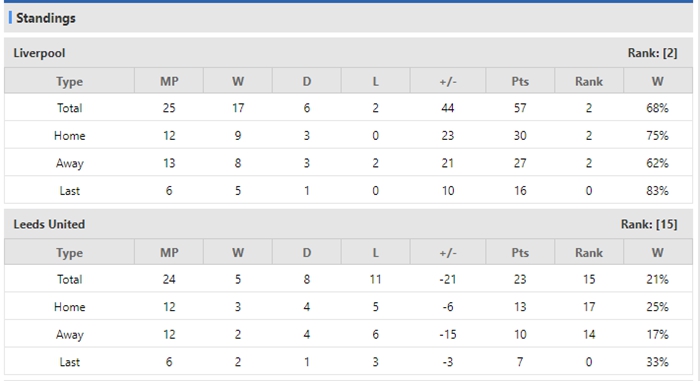 Leeds United
Collecting 23 points from 5 wins, 8 draws and 11 defeat, Leeds United are placed at 15th on the standing now. They have now lost three of their last four in the top flight and have shipped at least three goals in each of their last three. Leeds United lost 4-2 to arch-rivals Manchester United at Elland Road on Sunday. Before that, they were defeated 3-0 by Everton.


Prediction
Playing Liverpool at Anfield is arguably the most difficult fixture in the Premier League for any side. Do not expect Leeds to spring any surprises.

Football English Premier League Leeds United Liverpool
(Disclaimer：Any views or opinions presented are solely those of the author and do not necessarily represent those of NowGoal. We disclaim any responsibility and accepts no liability for any direct or indirect loss or damage arising from any inaccuracies.)