The 2022 FIFA World Cup coming to an end, what an exciting year with many underdogs smashing the favorite yet again making the bookies mega-rich once more. Angela again coming to the rescue if you are willing to listen to the Queen of Hearts in football in this 3rd place play-off game between Croatia and Morocco.

Croatia was defeated by Argentina by class and not by luck, the 0-3 defeats had destroyed Croatian morale completely, and yet again this is the 3rd time they had failed to qualify for the final in their history.

Morocco was defeated by France 0-2, however, the way these Moroccan played throughout the tournament had captured many fans and they were very unfortunate not to beat France. Morocco came very close to scoring against France, only being denied because of the lack of quality compared to France.

Asian Handicap opened on Croatia at -0.25, clearly overpriced to me since Croatia ranks 12th against Morocco ranks 22nd in FIFA World ranking given the qualities of Croatia against a massive underdog. 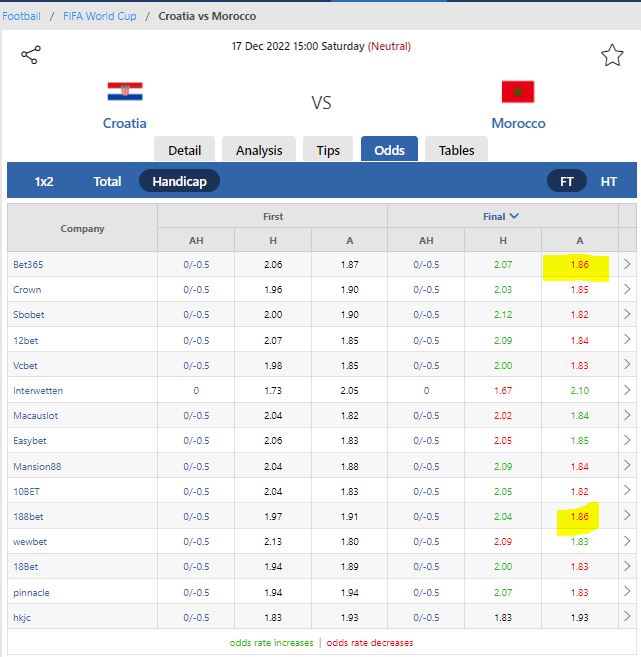 Morocco's odds on Asian Handicap (+0.25) clearly dropping since their cool display against France. And back in the Group stage, Morocco already managed to draw 0-0 against Croatia and prevented a goal. This game clearly going to be for Morocco in my opinion.

For higher returns, take a bet on Morocco to Qualify (or finish 3rd place). This market is a lot better than full-time 90 mins as it is included extra time and penalties!

Good Luck to my viewer who had read this, I hope you will see Angela more often on Nowgoal.com