Netherlands will meet Argentina in the quarter final of this World Cup at the Lusail Iconic Stadium on Friday.

After taking three wins and a draw in their four matches in this FIFA World Cup, Netherlands have extended their unbeaten run into 19 matches across all competitions. In the round of 16, they beat USA with 3-1, and they have two clean sheet in last four outings, as well as having score two goals or more in three of those matches. Cody Gakpo has performed well in the team, with scoring three goals in their opening three rounds. 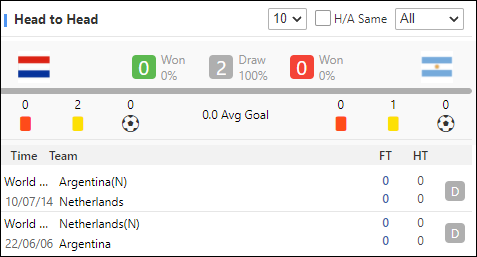 Argentina comes from three straight wins in this tournament, even though they lost to Saudi Arabia in the opening game. They have three goals in these four matches. However, they lost to Netherlands in three out of their seven meetings. They have failed to score in the last three h2h games even though they beat their opponent in the 2014 World Cup semis by a penalty shootout.

There is no action on goals in their latest meetings, but considering both sides’ performances especially on attack in this tournament, I am going to back we will back a scoring draw at 90 minutes.