FIFA World Cup Last 16th in the earlier kick off on Monday 5th December, Angie has expected a game that we could see it may go into extra time. Plenty of freak results from the group stage had brought a lot of surprises and caught most punters off guard, worldwide bookies are already profiting from the margin they have gained just on the group stage alone. Angie is hoping to land you a 4th win in a row with free tips today, so mark my word from the queen of hearts of football!

Japan – the Blue Samurai have been very resilient from their Group stage so far and pulled off a surprise result. Having beaten Germany and Spain 2-1, their confidence and self-belief is on a high, however, a shock loss to Costa Rica 0-1 is a concern to me when the pressure is on the Japanese.

Croatia - a very disappointing show in this world cup so far, they had only managed one win, a 4-1 over Canada, and came from behind in the early stage. Then the Croatian drew blank against Morocco and Belgium did not convince me a bit from the former 3rd place finished back in the 2018 World Cup. Players are also aging and this is a weakness that the Japanese could exploit.

Japan ranks 24th in the FIFA World Ranking, whilst Croatia ranks 12th. Worldwide bookies put Croatia as the favorite with Asian Handicap at -0.5, however, the odds already drifting away on Croatia showing most punters believe Japan could hold on for a draw in the last 16th. Japan 1X shows a decent value at the price of around 1.83 on average.

Asian Goal Line opens at 2.25 goals, bookies neither keen to see too many goals. With so many 0-0 results in Group games, surely not another one. I expect a 1-1 draw perhaps with Both Team To Score at odds of 2.08 Pinnacle seems a decent investment option. 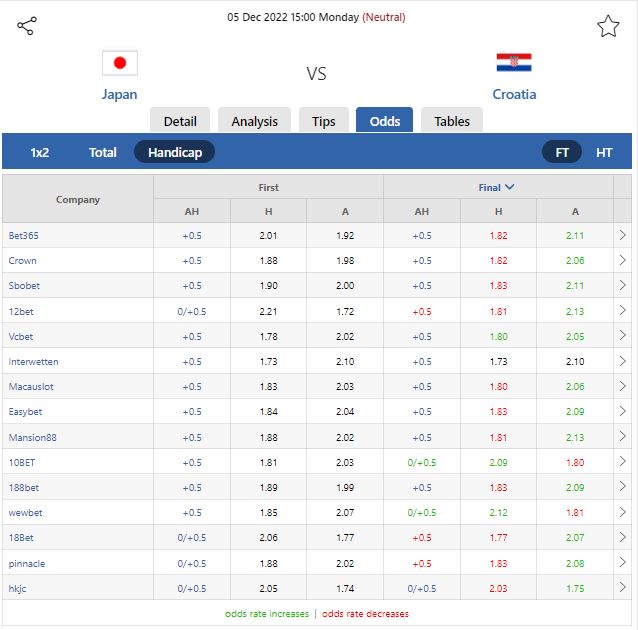 Last 2 meetings, both games ended up with under 2.5 goals.

First Choice: BOTH TEAMS TO SCORE