Barnsley head to MKM Stadium on Tuesday for the Championship clash with home side Hull City.

Hull City
Hull City go into this fixture following a 1-1 Championship drawn result against Queens Park Rangers. Hull City have not been in good attacking form in more recent games. Their sum of goals equals just 4 vs opposition teams during their last six fixtures. In those games, Hull City have also seen the number of goals scored against them come to 6. That kind of pattern won’t necessarily be sustained into this next game, though. 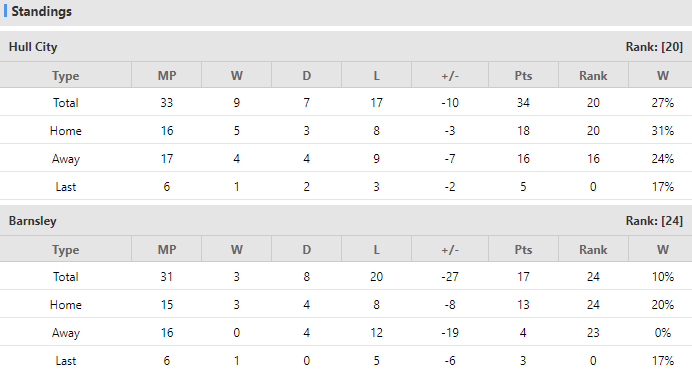 Barnsley
Following on from a losing effort in their last game against Coventry City in Championship action, Barnsley will be aiming to make amends here. It is worth noting that Barnsley have had real problems scoring goals over their last 6 clashes, contributing the poor return of just 2. In those matches, The Tykes have also seen the collective goal aggregate of their opponents equal 6.

Verdict:
In our opinion, Barnsley will need to push hard to find the net against this Hull City lineup who we think will do enough to score at the other end and edge ahead. We’re therefore tipping a good tussle with a 1-0 advantage for Hull City when the referee blows for full-time.

Football England Championship Barnsley Hull City
(Disclaimer：Any views or opinions presented are solely those of the author and do not necessarily represent those of NowGoal. We disclaim any responsibility and accepts no liability for any direct or indirect loss or damage arising from any inaccuracies.)