This should be the highlight of a match in this World Cup, forget everything else guys as most of you would know this match between Ghana and Uruguay in the final game of Group H is a war. Angie was still a student back in 2010 watching this famous game when Uruguay’s Luis Suarez used his hand to block a goal-scoring opportunity in the 119th minute in extra time and denied Ghana from qualifying for the Quarter Finals in the 2010 World Cup in South Africa. Times flies and Angie is no longer the sweet teenager no more, how sweet were the old days?

Ghana – the Black Stars knows today's game is revenge over their robbery back in 2010, they will do everything they can to qualify and force Uruguay to be eliminated from the World cup, Group H game today a draw will be good enough for Ghana to qualify into the last 16th. Ghana beat South Korea in a thrilling game by 3-2, the African Black Stars were 2-0 up but defensive errors allowed South Korea to peg back to 2-2. Thanks to Mohammed Kudus' strike in the 68th minute to make it 3-2 to Ghana.

Uruguay - very disappointing shows in this world cup, they have yet to score a single goal. Both Darwin Nunez and Luis Suarez showed no quality whatsoever in the game against South Korea (0-0) and were badly beaten by Portugal (0-2) in the last match. Uruguay must beat Ghana and hope South Korea does not get a better result than they do. Uruguay expects to go all-out attack, they know Ghana will play defensively today.

Ghana ranks 61st in the FIFA World Ranking, whilst Uruguay ranks 14th. Most bookies opened Asian Goal Line initially at 2.25 goals, however as Group H decider down to the very last game, Asian Goal Line upgraded to standard 2.5 goals with odds also lowering. Pretty much in line with Angie’s expectations. 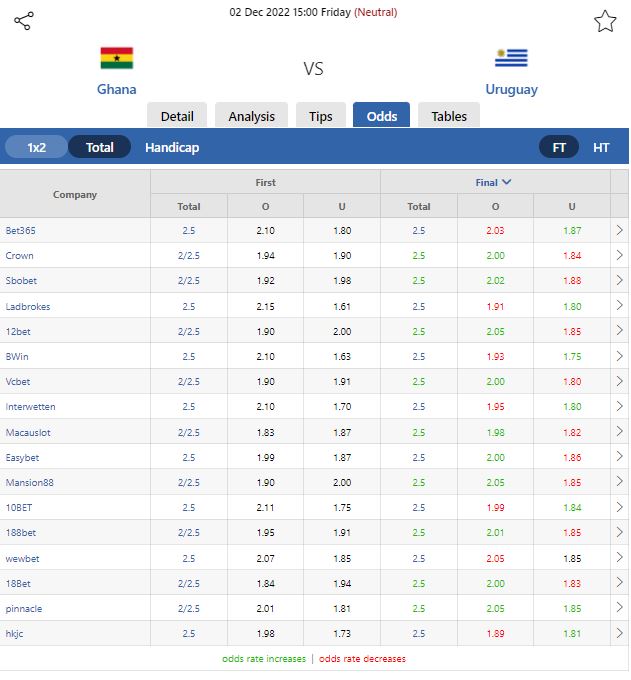 Uruguay's 1-1 draw with Ghana back in 2010 was the only meeting between the two sides in South Africa.