Group F will be settled today and we could see surprise packaging Morocco to qualify for the last 16th of the 2022 FIFA World Cup for the first time in their history. On the same day, Croatia was up against Belgium and neither of the sides can afford to lose with Belgium in a much worse position than Croatia, the Belgians had to win their match regardless of the result between Canada and Morocco.

Canada – the brave Canadian finally lose their surprise to the world audiences, their 1-4 heavy defeat to Croatia marked their elimination from the 2022 FIFA World Cup. Canada was so close to beating Belgium in their first game, they played superbly against Belgium and had a dream start against Croatia's last match when Bayern Munich’s Alfonso Davies slashed the first blood when he put Canada 1-0 inside 2 minutes in the match. Canada was hard done by Croatia just before the 1st half when they trailed 1-2 down, that’s pretty much goodbye to Canada’s world cup dream.

Morocco bravely outclassed Belgium with a marvelous victory, a 2-0 win in the second half meaning Morocco only need a draw against Canada to seal their entry into the knockout. However, Canada will not forfeit their dream without going down for a fight, they would like to at least win a game before heading home. Morocco is likely to deploy the same tactics as what they had played against Belgium and Croatia, ultra-defensive in their 1st half and likely to strike on Canada in the 2nd half. So far, only the underdog in the tournament such as Morocco had not yet conceded a goal, something to take note of.

Canada ranks 41st in the FIFA World Ranking, whilst Morocco ranks 22nd. The odds on Morocco to win started to drop on Sunday 27th as soon as Morocco beat Belgium whilst Canada was defeated by Croatia. 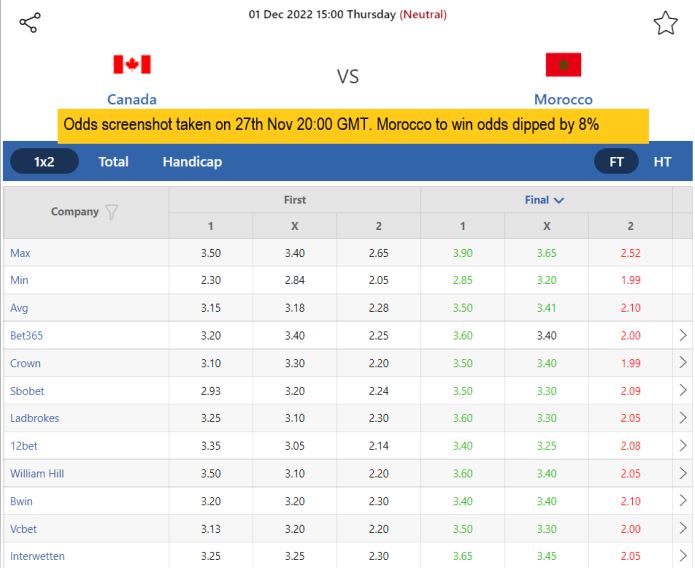