AC Milan and Fiorentina are both in great shape.

Despite a two-pronged attack in Conference and League games, Fiorentina have a long winning streak. After a winning streak, Milan tied with Cremonese in the most recent game. Up to seven Milan players have been called up for the World Cup game. It is more important to avoid injury for them than to win presently.

Fiorentina have a strong offense in recent games, averaging 2.1 goals per game over the last two months. They even managed three goals against Inter.

Milan recently had five odds victories when the AH first odds were -0.5/-1, which is an interesting fact. I expect to see a high-scoring home win result in the forthcoming game. 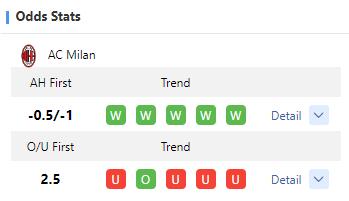