Luton Town will host visiting side West Bromwich Albion at Kenilworth Road Stadium in the Championship match on Saturday.

Luton Town
Luton Town will be hoping to bounce back here after a 3-0 Championship defeat last time out to Birmingham City. In their preceding six fixtures, Nathan Jones's Luton Town have found the net 8 times, with that being an average number of goals per match equal to 1.33. 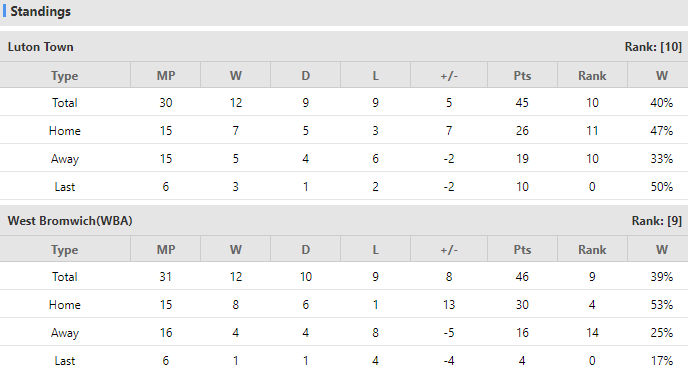 Verdict:
We’re of the opinion that West Bromwich Albion and Luton Town could well end up finding themselves level here, with both teams capable of netting. A close call, and we think a draw is quite likely. Our tip is therefore for a very even match with a 1-1 score at the end of this one.

Football England Championship West Bromwich(WBA) Luton Town
(Disclaimer：Any views or opinions presented are solely those of the author and do not necessarily represent those of NowGoal. We disclaim any responsibility and accepts no liability for any direct or indirect loss or damage arising from any inaccuracies.)