With the world cup edging closer, most of the top teams in Europe are already being instructed by their native country to the clubs and ensure the international players do not pick up any injuries, meaning this week we could see fewer goals on the top European Clubs. This is why Angie giving out a freebie to pick up a mediocre team today.

Bayer Leverkusen beat Cologne away in mid-week by 2-1, it was a huge win and lifted them off the relegation zone by further 4 points, today facing relegation rival Stuttgart, and I expect the host will win this tie.

Stuttgart likewise had also picked up a home victory in a mid-week game against fellow relegation candidate Hertha Berlin by 2-1, another big relief for Stuttgart as that lifted them 3 points clear of the relegation zone. 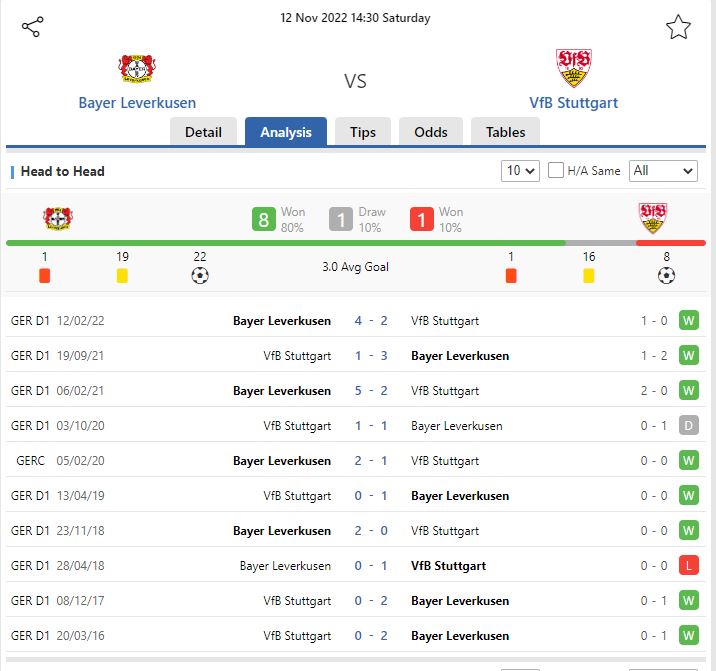 With the recent Head to Head between the two sides, we have seen a not stopped high goal result, last 3 games along, each match produced a minimum of four goals. Today's match is an important one, as this game would be the last game before the winter break, much earlier than normal because of the world cup. Both sides will hope to win this and stay clear away from the relegation zone and await the second half of the new season to start next year.

Angie picks up OVER 3.5 goals as a minimum. If you prefer higher returns and the thrill, pick on OVER 4.5 goals.

Best of Luck in the World Cup guys, Angie will be posting some World Cup articles.