Birmingham City will be at Bet365 Stadium on Saturday for the Championship tie with home team Stoke City.

Stoke City
Stoke City go into this match following on from a 2-2 Championship draw versus Nottingham Forest. Michael O'Neill's Stoke City have managed to score a sum total of 10 times over their past 6 outings. The number of goals that they have conceded in those same games is 7. Going into this encounter, Stoke City have not won against Birmingham City in their previous 3 matches in the league. 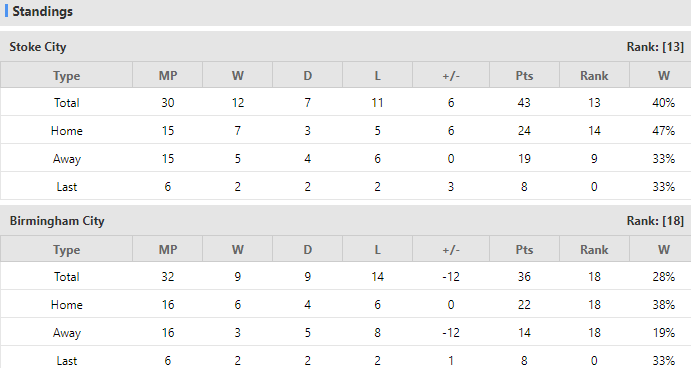 Birmingham City
Birmingham City come into this meeting after a 3-0 Championship win vs Luton Town in their most recent outing. The numbers tell their own story, and Birmingham City have been scored against in 5 of their last 6 games, seeing opposing sides hit 10 goals in all. In defence, Birmingham City can certainly do much better. That kind of pattern might not be carried forward here, of course.

Verdict:
We’ve got the feeling that Stoke City look likely to create the chances to score more than once when they line up against Birmingham City, who won’t find it easy getting goals. We’re therefore anticipating a 2-0 margin for Stoke City when all’s said and done.

Football England Championship Birmingham City Stoke City
(Disclaimer：Any views or opinions presented are solely those of the author and do not necessarily represent those of NowGoal. We disclaim any responsibility and accepts no liability for any direct or indirect loss or damage arising from any inaccuracies.)