Werder Bremen
Werder Bremen, following on from their previous result, will be hoping for more of the same after the 1-2 Bundesliga 2 triumph versus Hansa Rostock. Werder Bremen have been on a persistent run of goalscoring form, hitting the target in each and every one of their last 6 matches. They’ve claimed a sum of 18 during that time while seeing the number of goals scored against them stand at 8. 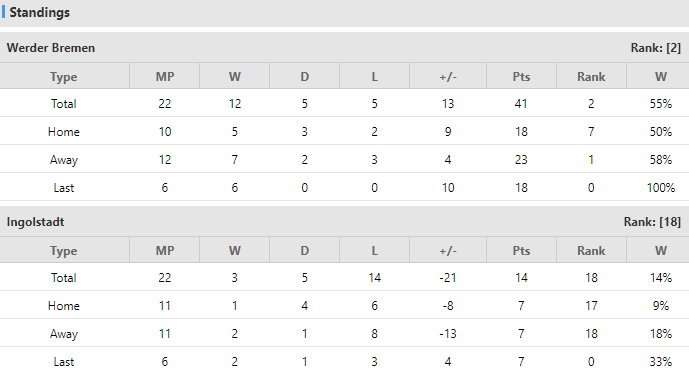 Ingolstadt
Last time out, Ingolstadt drew 0-0 in the Bundesliga 2 tie with SV Sandhausen. Rüdiger Rehm's Ingolstadt have slotted home a total of 10 times throughout their most recent 6 matches. The overall goals that they have conceded during that same period adds up to 6.

Verdict:
There is a big difference between the two teams and Bremen are on a seven-game winning streak. The 1X2 first odds is 1.50-4.33-6.00, which means support the home team. Werder Bremen should win this game.

Football German Bundesliga 2 Ingolstadt Werder Bremen
(Disclaimer：Any views or opinions presented are solely those of the author and do not necessarily represent those of NowGoal. We disclaim any responsibility and accepts no liability for any direct or indirect loss or damage arising from any inaccuracies.)