Valencia has gradually become a team sitting in the middle of La Liga table after selling off several key players in recent seasons. Although there is little pressure against relegation temporarily, there is basically no chance to qualify for the European competition. Same in this season, Valencia's performance has been inconsistent, and they have fell into five rounds without a win after they were drawn by Real Sociedad with 1-1 in last away game. A victory is urgently needed to boost their morale. 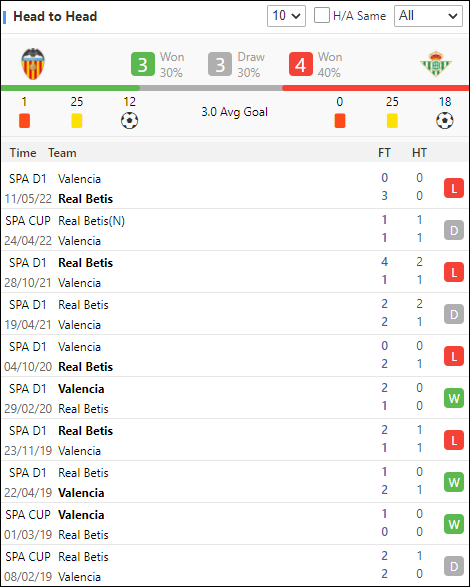 Real Betis has been in a relatively stable state since the beginning of this season. They have early secure the the top spot in the group of Europa League. On League, they have picked up 3 wins and 1 draw after they were drawn by Sevilla in the last round in 1-1. They urgently need to climb into 4th in the standings, which seems to be a strong competitor for Champions League qualification. Moreover, their recent away performance has been very consistent, and they have even kept a clean sheet for 4 consecutive away games, so they will be confident in this visit.

Valencia's state and strength are at a disadvantage, while Real Betis' recent away forms have been very stable. Go for the guests in this meeting.