GD Chaves will be faced with Santa Clara on Monday in the 12th round of Liga Portugal 1.

GD Chaves suffered a 0-5 defeat at the hands of Benfica last Saturday, putting their three-game-unbeaten run come to an end. On home soil, they are unbeaten for the latest four home League matches, but three were ended with draws. Now they are placing 11th on League table, with four wins, three draws and four losses. 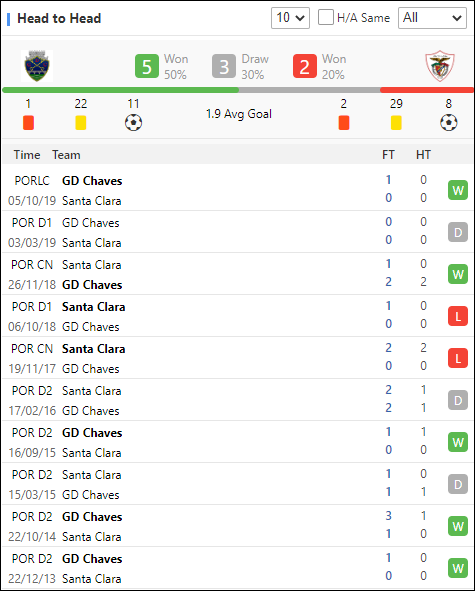 Santa Clara are coming off a 1-1 home draw against Porto last outing, and they just won one out of their last six rounds. Now they are ranking 15th with 9 points, same points as 16th-placed Gil Vicente in the relegation playoff spot. Santa Clara have been struggling on the road, with only 1 one but 5 defeats in their six away League matches.

GD Chaves have been unbeatable in their four meetings against Santa Clara in the League and even won three. Santa Clara are not playing well away from home, while GD Chaves are unbeaten at home. I will back the host to win the Handicap.