Hansa Rostock beat Regensburg 3-0 away from home in the last round, and returned to winning away after a lapse of 4 winless rounds. In this round, Rostock will return to the home soil. 3 of their previous 5 league victories came from the home field, which shows that their home form is stronger. Moreover, although Rostock is currently ranked 12th in the standings, they are only 4 points ahead of the relegation zone, and there is still a lot of pressure to avoid relegation. 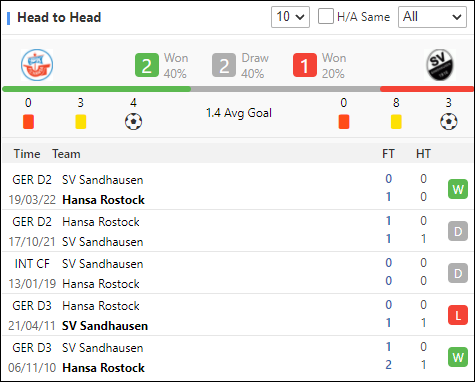 Sandhausen have claimed a 2-2 home draw against Brunswick in the last round. In the last 3 league matches, they have only recorded 1 draw and 2 losses. Ranking 17th in the standings, their pressure to avoid relegation is very heavy. And the disadvantage is that they had only picked up 2 points in 7 away league games, and conceded almost 2 goals per game.

Hansa Rostock will be trustworthy in this round against the poor SV Sandhausen. But SV Sandhausen should defend very strongly. So I will bet that there will be less than 2.5 goals in the confrontation.