The 14th round of 2022-23 Ligue 1 campaign will see Troyes versus AJ Auxerre on Friday.

Troyes had only won three of the past 13 rounds in this season, with 23% win rate. They suffered a 3-4 away loss at the hands of PSG, but their top scorer, Balde M., has contributed two goals, being in good state. In terms of home games, Troyes have suffered 4 consecutive draws recently, being in mediocre home forms. 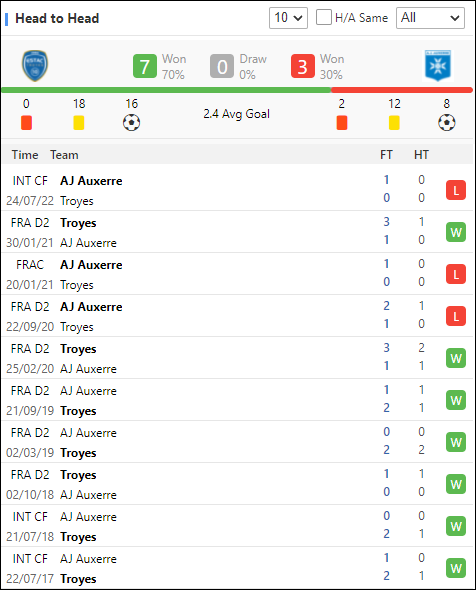 Auxerre beat Ajaccio 1-0 at home in the last round of the league, ending their previous poor record of 2 draws and 6 losses in the 8 games, and their morale has been improved from this victory. At present, the team has achieved a record of 3 wins, 3 draws and 7 losses after 13 games, ranking 16th with 12 points, hovering on the edge of the relegation zone, and there is a lot of pressure to avoid relegation. Moreover, the team's away performance was unstable. So far, they have lost 5 out of 6 away games, and conceded as many as 2.67 goals per game. The defense side is full of mistakes.

Troyes have a record of 7 wins and 3 losses in last 10 meetings against AJ Auxerre. Both sides are not in satisfying forms as expected, but I will predict a high-scoring clash due to Troyes’s fierce attack and AJ Auxerre’s poor defenses.

Suerte 558 Article
I am a football fans and I like writing.
See More Article