Crystal Palace will play against Chelsea at Selhurst Park Stadium on Saturday.

Crystal Palace
They get three-match unbeaten run recently even if they play two-fronted attack on the League and the cup. But they are still weak in offensive, with only three scoring goals recently, two of which are in the Cup. 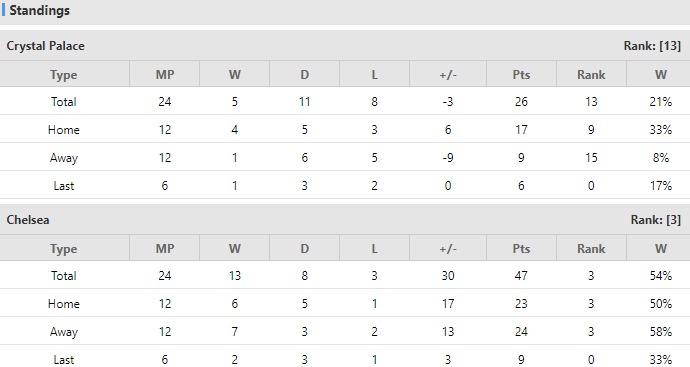 Chelsea
They defeated Palmeiras in last game of FIFA Club World Cup and won the champion, which makes them in high morale. They are sitting in the third place in League table now. But they have to prepare for European games in few days. They will possibly reserve themselves.

Verdict:
Chelsea are better than Crystal Palace. What’s more, Chelsea got a winning streak from Crystal Palace in the past head to head clashes. And they are in form now. So Chelsea are more likely to win in upcoming game.

Football English Premier League Chelsea Crystal Palace
(Disclaimer：Any views or opinions presented are solely those of the author and do not necessarily represent those of NowGoal. We disclaim any responsibility and accepts no liability for any direct or indirect loss or damage arising from any inaccuracies.)