West Ham and Newcastle are going to fight for EPL Round 26 at London Stadium on Saturday.

West Ham United
They rank the fifth in League table, with just two points away from the fourth. They still stand the chance to qualify for UEFA Champions League. They are in form, which have been unbeaten for three matches. 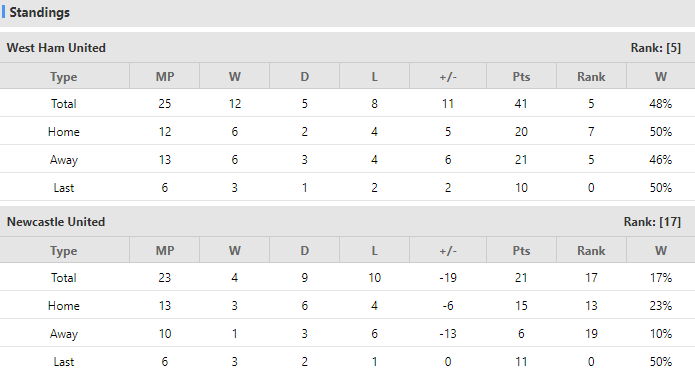 Newcastle United
They finally go on track after they bring in new players in transfer window. They have been unbeaten for five League games even get a three-match winning streak, which makes them escape from relegation zone. Now they rank the seventeenth in League table.

Verdict:
Both of them are in good condition. West Ham won over Newcastle this season before, which makes them have psychological advantage. And West Ham have home advantage. So the victory is tending to the host.

Football English Premier League Newcastle United West Ham United
(Disclaimer：Any views or opinions presented are solely those of the author and do not necessarily represent those of NowGoal. We disclaim any responsibility and accepts no liability for any direct or indirect loss or damage arising from any inaccuracies.)