VfL Wolfsburg come up against visiting side Hoffenheim at Volkswagen Arena in the Bundesliga 1 meeting on Saturday.

VfL Wolfsburg
VfL Wolfsburg fans will want a repeat of their previous result, being the 0-2 Bundesliga 1 victory versus Eintracht Frankfurt. A recurring characteristic of recent VfL Wolfsburg games is the number of results with a nil in them. From their prior 6 clashes before this one, in as many as 5 of them a bet on BTTS would have been a losing one. 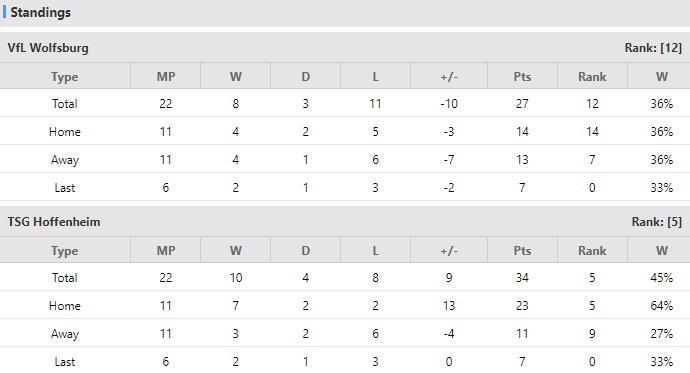 TSG Hoffenheim
Hoffenheim will go into this match following on from a 2-0 Bundesliga 1 win to defeat Arminia Bielefeld in their most recent match. Demonstrating their fondness for high-scoring encounters, goals have been scored 21 times in the prior six games in which Hoffenheim have played, making it an average of 3.5 goals per meeting. Their opponents have hit 12 from this total. That kind of pattern isn’t assured to be sustained here, of course.

Verdict:
Looking at these two teams, we feel that Hoffenheim and VfL Wolfsburg could end up without much reward for their efforts here. A draw is a real possibility, as a clear-cut winner doesn’t appear to be obvious. We’re therefore anticipating a tight encounter, finishing with a 0-0 score at the end of the 90 minutes.

Football German Bundesliga TSG Hoffenheim VfL Wolfsburg
(Disclaimer：Any views or opinions presented are solely those of the author and do not necessarily represent those of NowGoal. We disclaim any responsibility and accepts no liability for any direct or indirect loss or damage arising from any inaccuracies.)