Arminia Bielefeld will take to the pitch with away side Union Berlin at SchücoArena in this Bundesliga 1 game on Saturday.

Arminia Bielefeld
Arminia Bielefeld will be wanting a better result here after the 2-0 Bundesliga 1 defeat in their last game at the hands of Hoffenheim. Over their prior six fixtures, Frank Kramer's Arminia Bielefeld have netted a combined total of 9 times resulting in an average number of goals per match equal to 1.5. 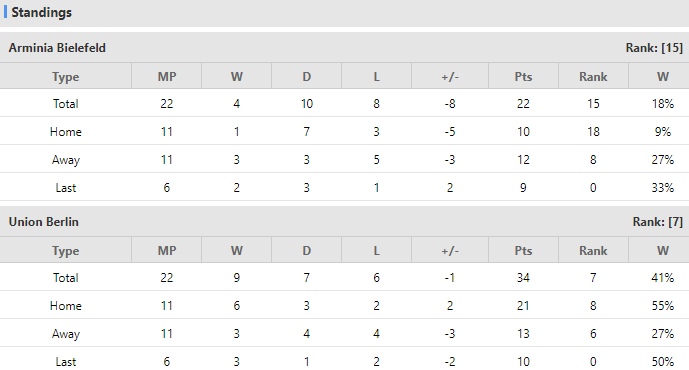 Union Berlin
Following on from tasting defeat last time out to Borussia Dortmund in Bundesliga 1 action, Union Berlin will be hoping to turn things around here. Showing their penchant for productive encounters, we’ve seen goals 20 times in the last six games in which Union Berlin have taken to the pitch, giving a mean average of 3.33 goals each fixture. Opposition teams have hit 11 of this grand total.

Verdict:
We’re thinking that Arminia Bielefeld may not find it easy to hit the back of the net against this Union Berlin lineup who we think should get the win and a maybe even keep a clean sheet as well. That’s why we have predicted a 0-1 winning score for Union Berlin at the end of the 90 minutes.

Football German Bundesliga Union Berlin Arminia Bielefeld
(Disclaimer：Any views or opinions presented are solely those of the author and do not necessarily represent those of NowGoal. We disclaim any responsibility and accepts no liability for any direct or indirect loss or damage arising from any inaccuracies.)