Elche CF line up against visiting side Rayo Vallecano at Estadio Martínez Valero in this La Liga game on Friday.


Elche
Six points clear of the relegation zone, Elche move into 14th spot in the table. Elche won three, drew one, and lost one of the last five league games which is a fantastic record given they have played the likes of Villarreal (a 1-0 win at home), Real Madrid (a 2-2 draw on the road), and Sevilla (a 2-0 defeat on the road) in the process. Elche have seen their defence breached in 5 of their previous 6 games, shipping 8 goals along the way. 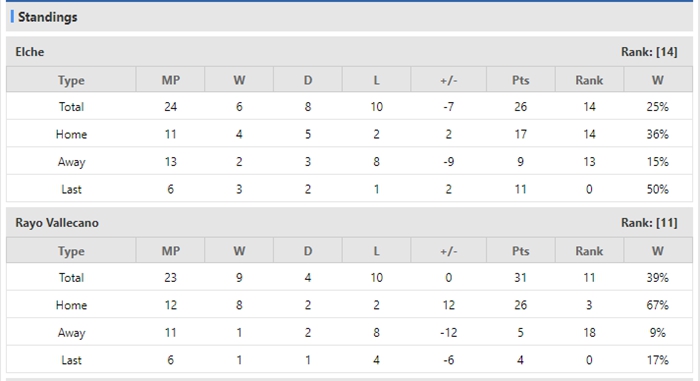 Rayo Vallecano
Boasting 31 points from their opening 23 matches of the season, Rayo Vallecano are currently 11th in La Lig. However, they have not been victorious in the league since December 18, picking up just one point from their last five games, losing their last three against Athletic, Celta and Osasuna -- the latest 3-0 defeat at home. Rayo Vallecano have scored 5 goals of their last 6 games, conceding 9  in total.

Prediction
Taking the form of both sides into consideration, the game is expected to be a low-scoring affair. It is unlikely that either side will be able to keep a clean sheet in this game.

BTTS (Both Teams to Score)
Under 2

Football Spanish La Liga Rayo Vallecano Elche
(Disclaimer：Any views or opinions presented are solely those of the author and do not necessarily represent those of NowGoal. We disclaim any responsibility and accepts no liability for any direct or indirect loss or damage arising from any inaccuracies.)