Mainz come up against visiting side Bayer Leverkusen at MEWA Arena in this Bundesliga 1 match on Friday.


FSV Mainz 05
With 31 points from 22 games, Mainz are currently ninth in the Bundesliga table, level on points with Eintracht Frankfurt. They have been winless in 5 of their previous 8 Bundesliga affairs. Mainz were denied their second win on the bounce last Saturday as they were held to a 1-1 draw at Freiburg. This followed a thrilling 2-0 win over Hoffenheim on February 5 which saw their three-game losing streak come to an end. 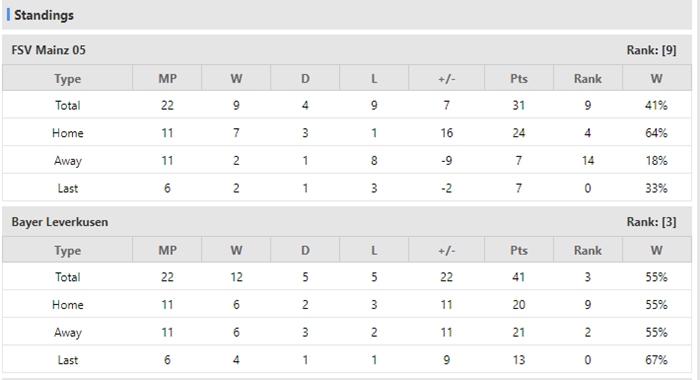 Bayer Leverkusen
After failing to win any of their final five games in 2021, Bayer Leverkusen have turned a corner this year and this turnaround has seen them rise to third place in the Bundesliga table with 41 points from 22 games. They have won their last four consecutive games and undefeated since the turn of the year. Bayer Leverkusen continued their fine string of performances as they claimed a comfortable 4-2 win over Stuttgart last time out.


Prediction
Bayer Leverkusen have been in stellar form this year and they are facing Mainz, who have never beat them in eight consecutive games. Therefore, predict they will be the winner in this game.

Football German Bundesliga Bayer Leverkusen FSV Mainz 05
(Disclaimer：Any views or opinions presented are solely those of the author and do not necessarily represent those of NowGoal. We disclaim any responsibility and accepts no liability for any direct or indirect loss or damage arising from any inaccuracies.)

Betty 420 Article
Betty loves the game of soccer since she was a child, this passion allowed her to embark on a career as a soccer analyst. She believes all leagues have their own charms. Accurate soccer predictions give me a great sense of accomplishment”, Betty said.
See More Article