Juventus come up against visiting side Torino at Allianz Stadium in the Serie A tie on Friday.


Juventus
Juventus are currently fourth in the Serie A table, nine points behind leaders AC Milan. They have won three of their last five in the league. Juventus go into this game following with a 1-1 Serie A drawn match versus Atalanta. Prior of that game, they 2-1 beat Sassuolo in Coppa Italia. Juventus shipped only one goal in the last four league outings 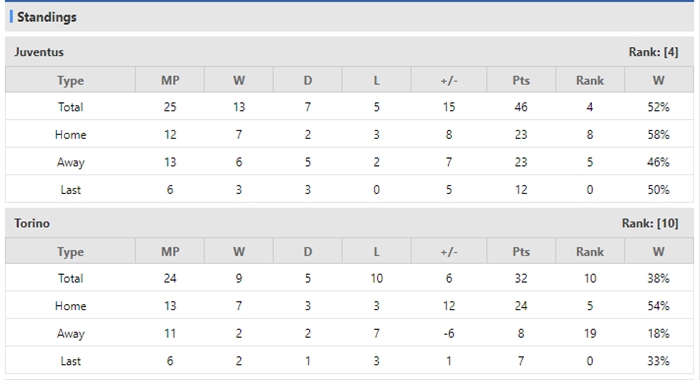 Torino
Recording nine wins, five draws and 10 defeats to collect 32 points, Torino are placed at 10th spot in the table. However, they have only taken one point from their last three Serie A matches. Torino draw with Sassuolo on January 23 before losing against Udinese and Venezia in their last two fixtures. Torino have been struggling for goals lately, netting just one in the last two games.


Prediction
Torino have struggled on scoring issue and their travels in Serie A this season. Expect Juventus to take down this game completely.

Football Italian Serie A Torino Juventus
(Disclaimer：Any views or opinions presented are solely those of the author and do not necessarily represent those of NowGoal. We disclaim any responsibility and accepts no liability for any direct or indirect loss or damage arising from any inaccuracies.)