Heidenheim will arrive at Rudolf-Harbig-Stadion on Friday for the Bundesliga 2 showdown with home side Dynamo Dresden.

Dynamo Dresden
Dynamo Dresden prepare for this game after a 0-0 Bundesliga 2 draw versus SC Paderborn 07. Dynamo Dresden have really struggled up front in recent times. Their goals record equals just 3 vs opponents over the course of their previous six matches. In those games, Dynamo Dresden have also seen the tally of goals that have gone against them total 8. 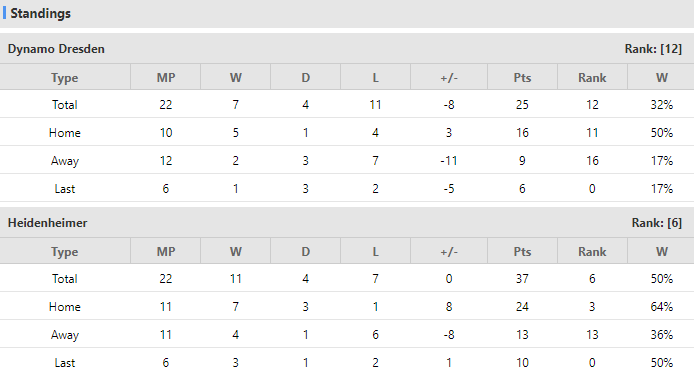 Heidenheimer
After tasting defeat last time out to Hamburg in Bundesliga 2 competition, Heidenheim and their fans will hope to get a better result this time. The numbers tell their own story, and Heidenheim have been scored against in 5 of their last 6 games, with opponents netting 8 goals in all. In defence, Heidenheim have been far from perfect. We will just have to see whether or not that trend will be continued on in this game.

Verdict:
Heidenheimer hasn't been in good form lately, but they have a huge advantage. The 1X2 first odds is 2.55-3.25-2.45, seems lacked of confidence to the home team. Heidenheimer should take points in this game.

Football German Bundesliga 2 Heidenheimer Dynamo Dresden
(Disclaimer：Any views or opinions presented are solely those of the author and do not necessarily represent those of NowGoal. We disclaim any responsibility and accepts no liability for any direct or indirect loss or damage arising from any inaccuracies.)