Chicago Bulls
The Chicago Bulls have enjoyed an impressive run of wins in their last few games. Despite being plagued with severe injury issues, the Bulls have managed to hang onto their position as the second seed in the East. Chicago defeated the San Antonio Spurs 120-109 on Monday. DeMar DeRozan led the team with 40 points and seven assists on 16 of 24 shooting, Nikola Vucevic led the team with 25 points, 16 rebounds and five assists while Coby White chipped in with 24 points and six assists. The Chicago Bulls are averaging 112.4 points on 48.3 percent shooting and allowing 110.2 points on 46.6 percent shooting. 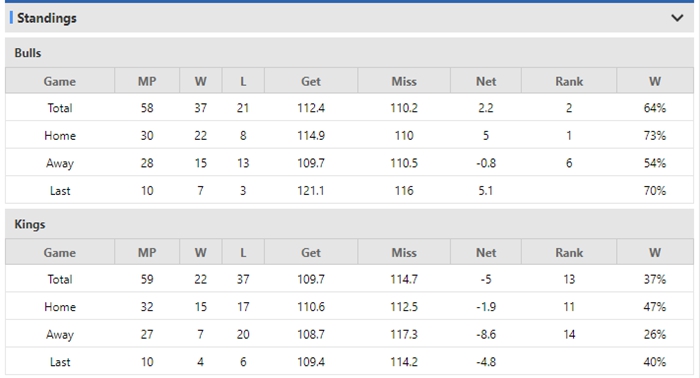 Sacramento Kings
Although the Sacramento Kings will head into their next game on the back of a loss, they have shown solid potential after making personnel changes to their roster. They are coming off an 85-109 loss against the Brooklyn Nets, which snapped their two-game winning streak. De’Aaron Fox led the way with 26 points on nine of 18 shooting, Davion Mitchell added 13 points while Donte DiVincenzo chipped in with 12 points, eight rebounds and five steals. The Sacramento Kings are allowing 36.1 percent shooting from deep and are grabbing 43.8 rebounds per game.


Prediction
Considering the recent personnel changes made by the Kings, the Bulls are a tough team to beat at home. It’s believed that they should emerge as the winners in their matchup against the Sacramento Kings.