The Detroit Pistons and Boston Celtics meet Wednesday in NBA action at the TD Garden.


Boston Celtics
The Boston Celtics entered Tuesday 33-25, leaving them second in the Atlantic Division, two games behind the 76ers for the top spot in the division race. Last night, the Celtics (34-25) outrebounded the 76ers by a 51-40 margin and coasted to a 135-97 road triumph against Philadelphia. Jaylen Brown led the team with 29 points, eight rebounds and three assists, Jayson Tatum added 28 points with 12 rebounds and six assists while Aaron Nesmith chipped in with 18 points on six of nine shooting off the bench. The Boston Celtics are averaging 108.4 points on 45 percent shooting and allowing 103.6 points on 43 percent shooting. 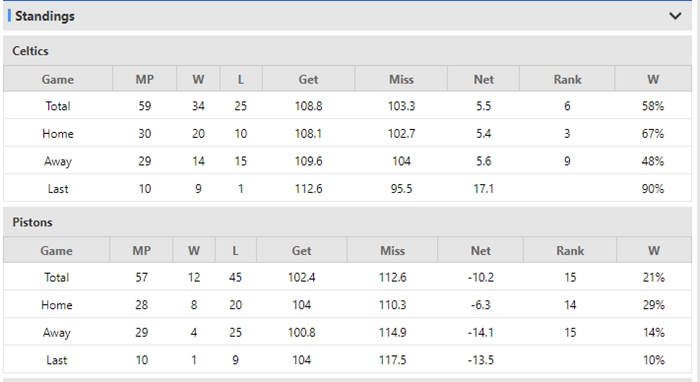 Detroit Pistons
The Detroit Pistons entered Tuesday in the basement of the Central Division, 24.5 games behind the Bulls for the division lead. The Pistons (12-45) are in the midst of an eight-game losing streak and own the worst overall record in the league. On Monday, Detroit shot just 38 percent from the field during a 103-94 road loss against Washington. Saddiq Bey led the team with 24 points and five assists, Jerami Grant added 14 points while Cade Cunningham chipped in with 12 points. The Detroit Pistons are averaging 102.4 points on 42 percent shooting and allowing 112.6 points on 47.5 percent shooting.


Prediction
Detroit have struggled to put points on the board and were torched defensively in the last week. The Celtics have found something that has worked of late and are tightening up the Atlantic Division race again. So, expect Boston to take down this game.