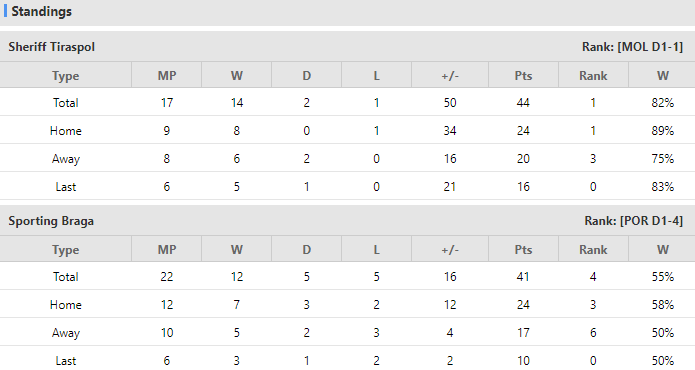 Sporting Braga
Braga come into this game following on from a 2-1 Primeira Liga win as they beat Paços de Ferreira in their previous outing. Looking at their form, and Braga have been scored against in 5 of their last 6 games, seeing their opponents hit 7 goals overall. Defensively, Braga seem to have a bit of a soft underbelly. Even so, it remains to be seen whether that pattern shall be replicated in this next game.

Verdict:
Here, we’re thinking that Sheriff Tiraspol will have to play well to get anything against this Braga team who we think might get the vital goal that wins it. That’s why we have predicted a very competitive encounter with a 0-1 winning score for Braga at the end of the match.

Football UEFA Europa League Sporting Braga Sheriff Tiraspol
(Disclaimer：Any views or opinions presented are solely those of the author and do not necessarily represent those of NowGoal. We disclaim any responsibility and accepts no liability for any direct or indirect loss or damage arising from any inaccuracies.)