The Dallas Mavericks and Miami Heat meet Tuesday in NBA action at the FTX Arena.


Miami Heat
The Miami Heat have had a stellar season so far, and are looking to be real contenders for the championship. They are atop the East standings with a 37-20 season record. Despite facing several injuries and setbacks, the Heat have stayed competitive, courtesy of their depth and brilliance. On Saturday, Miami carried a 15-point lead entering the fourth quarter and held on for a 115-111 home victory versus Brooklyn. Bam Adebayo led the team with 19 points, 14 rebounds and four assists, Duncan Robinson added 17 points while Tyler Herro chipped in with 15 points off the bench. The Miami Heat are averaging 109.1 points on 46.2 percent shooting and allowing 104.4 points on 44.3 percent shooting. 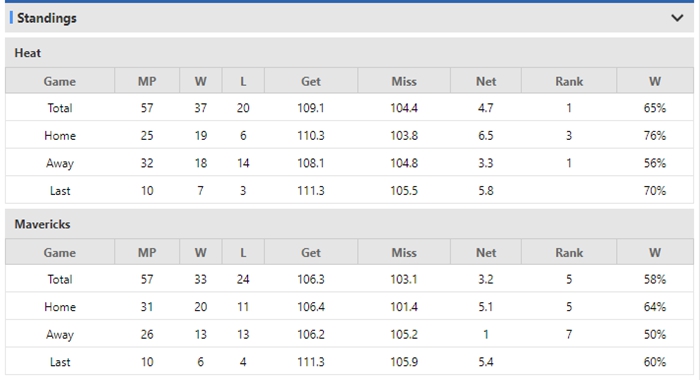 Dallas Mavericks
The Dallas Mavericks made some big moves at the trade deadline. They (33-24) have split their first 26 road games and are sitting in fifth place in the Western Conference standings. On Saturday, Dallas allowed LA to shoot 52 percent from the field during a 99-97 home loss. Luka Doncic led the team with 45 points, 15 rebounds and eight assists, Jalen Brunson added 22 points while Reggie Bullock chipped in with 17 points, but no other player scored more than six points. The Dallas Mavericks are averaging 106.3 points on 45.4 percent shooting and allowing 103.1 points on 45.4 percent shooting.


Prediction
The Mavericks and the Heat have had great seasons so far. They have terrific rosters, and could cause problem for other teams in the playoffs. These two teams rank in the top six in defensive efficiency and are the two slowest playing teams in the league. Therefore, take the under seems to be a good choice in this game.

Lucas Bryan 215 Article
Lucas Bryan has been crushing The Man since the early 90s. If you are trying to beat the sports books with stats, trends, and angles you are not going to have a lot of success if you do not know how to apply them. That is Lucas specialty.
See More Article