The Indiana Pacers invade the Fiserv Forum to battle the Milwaukee Bucks on Wednesday night.


Milwaukee Bucks
The Milwaukee Bucks hardly looked and played like defending champions in their humiliating loss to the Portland Trail Blazers. Even without three key players, including Giannis Antetokounmpo, the powerhouse squad still couldn’t stop the newly formed Blazers roster. Last night, Milwaukee trailed by 17 points at halftime and could not recover during a 122-107 home loss versus Portland. Jrue Holiday led the team with 23 points and six assists, Bobby Portis and Jordan Nwora each scored 17 points while Khris Middleton chipped in with 16 points, 11 rebounds and nine assists. The Milwaukee Bucks are averaging 112.8 points on 45.9 percent shooting and allowing 109.4 points on 44.6 percent shooting. 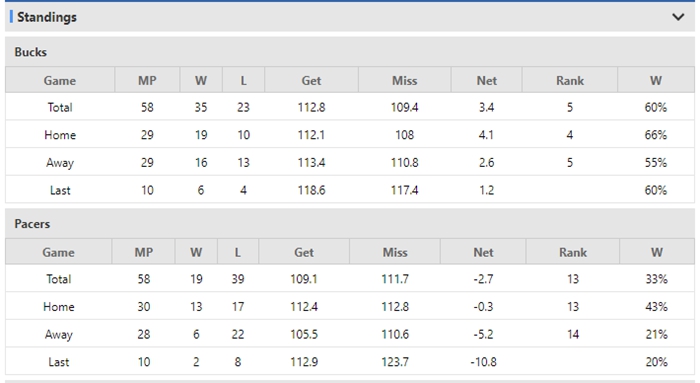 Indiana Pacers
The Indiana Pacers are only 4-11 in their last 15 games, including 0/6 in their last six matches. Shaking up the roster has not significantly improved their play. On Sunday, Indiana allowed Minnesota to shoot 51 percent from the field during a 129-122 home loss. Oshae Brissett scored 22 points with 13 rebounds and two blocks, Tyrese Haliburton added 22 points with 16 assists, Lance Stephenson scored 21 points off the bench while Jalen Smith chipped in with 17 points and 12 rebounds. The Indiana Pacers are averaging 109.1 points on 45.5 percent shooting and allowing 111.7 points on 47.2 percent shooting.


Prediction
The Pacers are a rebuilding team full of new faces who are playing for positions. However, Milwaukee could right things from their end and extend the Indiana Pacers’ losing streak.