Mito Hollyhock have claimed 12 wins, 10 draws and 14 losses after 36 rounds, raking in the middle of the table with 46 points. Both of their offensive and defensive sides are steady, with goal/loss rate as 40/39. In the last game, they lost to Mito Hollyhock 0-2 on the road. Since then, they have suffered 3 losses in a row with losing all odds. As for their home forms, their last 0-1 home defeat at V-Varen Nagasaki ended their previous home unbeaten run(2W-2D). 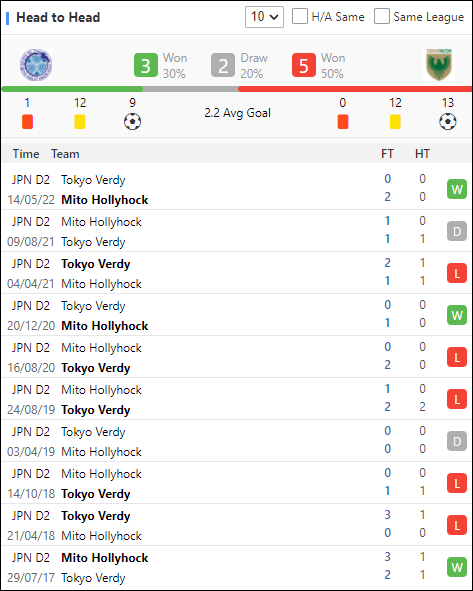 Tokyo Verdy failed to win for their latest 8 matches across all competitions. They are coming from a 2-2 away draw at Machida Zelvia, also, they have lost goals in past 7 games, being in poor defenses. Moreover, the team haven’t won any of their last 5 away League games, with conceding 9 goals totally.

In the past 10 meetings between these two sides, Mito Hollyhock have a record of 3 wins,2 draws and 5 losses, including a 2-0 win over Tokyo Verdy in first leg of this season. I think the host would get a narrow win and there won’t be many goals.