Villarreal will play host Sevilla on Sunday’s La Liga. Both sides have been scheduled on European games in mid week.

Villarreal is currently sitting fifth position on League table. Four of their first five rounds were played on away field, but Villarreal could also achieve a record of 3 wins, 1 draw and 1 loss. They won the only one home game 4-0 against Elche, and their only league defeat comes from a 1-0 loss at Real Betis. In midweek’s Europa Conference League , they beat Hapoel Be'er Sheva 2-1 on the road, which has been their second win in a row on Europa Conference League. 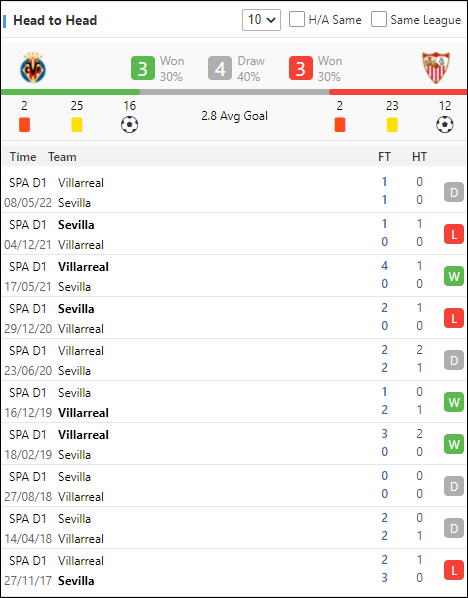 Sevilla have only picked up four points in the openning five rounds, 6 points behind of their rival. Their performances on the Champions League are also not good, since they had only got 1 point in the first two rounds. To be mentioned, the team have conceded 6 goals totally in three away games, and they had only won 2 out of recent 12 away games on La Liga.

Sevilla have only earned two points in their last four La Liga visits to Villarreal, and their defensive sides are riddled with mistakes. I will be back the home side in this clash.