Brighton head to Old Trafford on Tuesday for the Premier League game with hosts Manchester United.


Manchester United
One point behind fourth-placed West Ham, Manchester United are placed fifth in the Premier League table with 40 points from 24 games. Since the latest international break, Manchester United have played three games where theyve taken the lead and then relinquished it to settle for a 1-1 stalemate. In their latest game they shared it with Southampton, before that had been Burnley and even Middlesbrough in FA Cup. 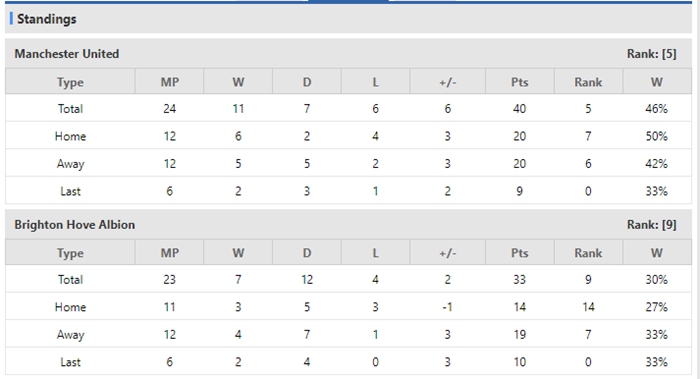 
Prediction
It is difficult to back Man United to keep a clean sheet at the moment. But the home side will somehow navigate their way to a hugely important three points against the Seagull. Anyway expect Manchester United to be unbeaten.

Football English Premier League Brighton Hove Albion Manchester United
(Disclaimer：Any views or opinions presented are solely those of the author and do not necessarily represent those of NowGoal. We disclaim any responsibility and accepts no liability for any direct or indirect loss or damage arising from any inaccuracies.)