FSV Mainz 05 finished 8th last season, and in the new season, they strengthened their lineups and have an unbeaten start with 3 wins and 1 draw. However, when against the strong teams, their offensive and defensive sides still exist problems. They lost to Bayer Leverkusen 0-3 and fell a 1-4 away defeat at TSG Hoffenheim. 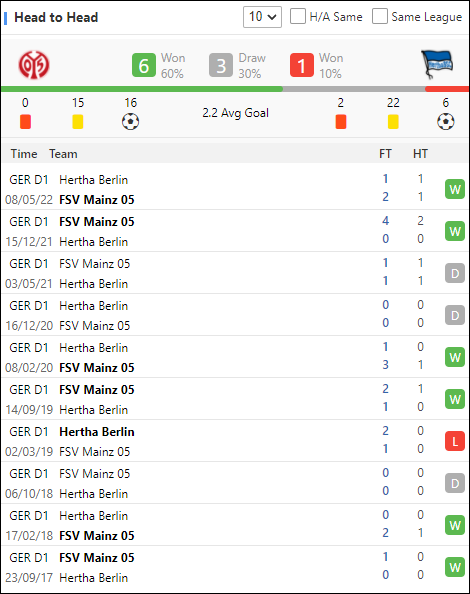 Hertha Berlin have been in poor forms in this season. They failed to win the opening four rounds and even lost three, fortunately, they seem to recover in last two rounds, with getting 1 win and 1 draw. Also, four goals have been scored in total, which shows better offenses than before.

FSV Mainz 05 took upper hand on overall strength, and they have been unbeatable on home soil since this season, while Hertha Berlin just got their first away win. However, FSV Mainz 05 may missed a key players due to the red card last outing, therefore, I think Hertha Berlin will extend their unbeaten run by this round.

David Garcia 533 Article
My name is Dave, a European soccer enthusiast, I believe all leagues have their own charms. This is the reason why I have been watching and studying those less popular leagues for 20 years.
See More Article