Sporting CP
Claiming nine points from their six matches, Sporting CP finished second in Group C behind Ajax, just beating Borussia Dortmund to a spot in the round of 16. Despite suffering three defeats in the section, Sporting made a standout result that was a 3-1 win over Dortmund at the end of November. As for their domestic league, Sporting CP sit in in second spot. They come into this game on the back of a 2-2 draw against Sergio Conceicaos Porto in the Primeira Liga. 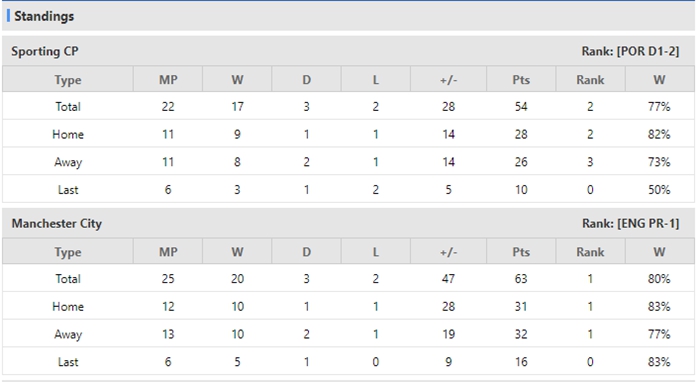 Manchester City
Losing two of their six matches as they were beaten at PSG and RB Leipzig in the group stage of this seasons competition, Manchester City’s performance was not satisfying for this seasons Champions League as expected. However, a record of 12 points was still enough to top the section. On Saturday, the ManCity got a 4-0 win over Norwich City in the Premier League.


Prediction
Dominant dismantling of their opposition has become the norm for Manchester City. Even though Guardiolas experimentation in crucial games has proved to be problematic in the past, Manchester City will still be the favourites to win.

Football UEFA Champions League Manchester City Sporting CP
(Disclaimer：Any views or opinions presented are solely those of the author and do not necessarily represent those of NowGoal. We disclaim any responsibility and accepts no liability for any direct or indirect loss or damage arising from any inaccuracies.)