The Orlando Magic pay a visit to the Denver Nuggets at the Ball Arena on Monday night.


Denver Nuggets
The Denver Nuggets entered Sunday second in the Northwest Division, four games behind the Jazz for the division lead. In the Western Conference, the team stood sixth, two games ahead of the Timberwolves for the final guaranteed playoff spot.  Denver defeated the Toronto Raptors 110-109 on Saturday and snapped Torontos eight-game winning streak. Nikola Jokic led the team with 28 points, 15 rebounds and six assists on 10 of 16 shooting, Jeff Green added 19 points with five assists while Aaron Gordon chipped in with 13 points. The Denver Nuggets are averaging 109.7 points on 47.4 percent shooting and allowing 107.6 points on 46.6 percent shooting 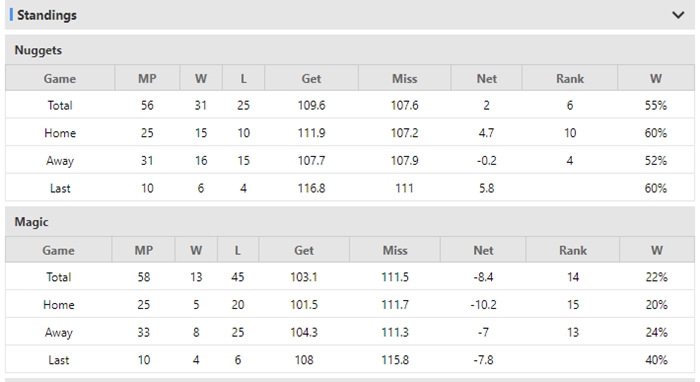 Orlando Magic
The Orlando Magic are 13-45 and last in the Southeast Division, 24 ½ games behind the first-place Miami Heat. Orlando was defeated by the Phoenix Suns 132-105 on Saturday for their second consecutive loss and fourth in the last five games played. Jalen Suggs led the team in scoring with 20 points and 10 assists, Cole Anthony added 17 points, Chuma Okeke scored 15 points with 10 rebounds off the bench while Wendell Carter Jr. The Orlando Magic are averaging 103.1 points on 43.3 percent shooting and allowing 111.1 points on 45.8 percent shooting.


Prediction
Both teams had Sunday off after playing back-to-backs Friday and Saturday. Orlando lost to both Utah and Phoenix by double digits on the road while Denver split road games against Boston and Toronto. Facing the Nuggets on the road with fatigue suggest the Magic are doomed to lose.

David Garcia 604 Article
My name is Dave, a European soccer enthusiast, I believe all leagues have their own charms. This is the reason why I have been watching and studying those less popular leagues for 20 years.
See More Article